Yep, the 5150 III is made by Fender, not Peavey, the schematics are still widely available via google search.

It does sound a bit different, a bit more high end bite, but the underlying feel of the 5150 is pretty much the same.

I only built the high gain channel, the cleans on the original 5150 are not that impressive and the other two channels of the 5153 would require a lot more gain stages.

The adjusting was done by comparing the two circuits, LND150 and the original 12ax7 stage. The plate or drain resistor is the same, so is the grid resistor and the coupling capacitor. The diode biasing circuit is exactly the same as proposed in KMGs article, but the bias circuit (with the PNP BJT transistor) is adjustable with a trimmer. What would be the cathode resistor and bypass capacitor in the tube stage are changed slightly by comparing the KMGs Marshall preamp circuit and the original JCM800 schematic. I used what i had, so it was the next closest E24 value. Instead of a 1.8k resistor I put in a 2.2k one and so on. The bypass caps are not really that important here, as the 5150 by itself already cuts bass below 800Hz in the first stage. I think I left them at 1uF.
Also, I put in a 500k gain pot with a resistor to decrease the maximum gain. It has a lot of it.

Most of the circuit in the preamp I recorded is 5153, but I didn't have any room on the perfboard left for a source follower tone stack, so I just made it plate driven, as in the original 5150. That probably cost me some highs, as the impedance is higher, but it wasn't that bad.
#2

Two back to back transformers will be fine at such low currents, that's also how I got the high voltage to the preamp.
Unfortunately I don't have the schematic, I followed the official tube amp schematic while adjusting it for the LND150 circuit directly on a piece of perforated pcb. I described the changes a couple of posts back. It has been a while since I last tinkered with that preamp, but if you really need the schematic, I can whip something up in KiCAD. It might not be *exactly* the preamp that was demoed, since I don't remember every detail, but it will probably sound closer to the real 5150/5153 (if you want a schematic, do tell which 5150 version are you after).
#3

I am not KMG and I too haven't been active for quite some time here, but I have built a few amps with this topology, so I can help in any way, should the need arise.

I built the EVH 5150 preamp inspired by KMGs excellent articles and it did in fact sound good with the LND150. So good that I later modded my main (real tube) amp into a 5153, because I found I really like the sound and the feel of those EVH amps. I would have absolutely no problem running my LND150 preamp through it instead of real tubes, but since I already had an amp, I found it more practical to have a single unit to carry around.

I haven't tested LND150 circuits extensively at lower voltages, but I did have some problems at ~120V. If the voltage went any lower, I could not bias the MOSFETs to sound good, they were clipping in a weird way. If you do end up going the KMG-style route, I recommend at least using a charge pump, like the one used for nixie tubes, so you can at least get into that 300-ish volt range. That way you don't need to buy a high voltage transformer with a low voltage winding for the solid-state power amp. The transformer is usually the most expensive part of any build (especially for tubes), so if you can just get one to power the power amp and derive the high voltage from there with a charge pump, your wallet will thank you.

As for the real tubes at low voltages - I wouldn't bother with them, if you want a high gain sound. Van Halen did use to run the tubes on his Marshall Plexi (it was a Plexi, right?) pretty cold (it was still above 100V), but that was meant to get more distortion from the power tubes, not so much the preamp. The tubes will distort differently on low voltages, and you probably won't like the result.
#4

Quote from: Katoda on January 11, 2016, 12:09:36 PM
Hi,
I didn't have a proper mic so I just turned the volume waaay down until the phone mic wasn't clipping and recorded a sample of the cleanup with the guitar volume knob.
https://soundcloud.com/user-119965807/evh-5150-preamp-phone-recording-of-guitar-volume-cleanup
Gain was on 11 o'clock, on the recording I gradually increase the guitar volume.

EDIT: Listening to it again, the gain was set kinda high, metal territory...

That sounds great in my ears!
What final amp did you use? That TDA2030 or your Fryette?

The Newcomer's Forum / Re: Mosfet JCM800 by KMG

The Newcomer's Forum / Re: Guitar plus iPod inputs

February 08, 2018, 01:29:38 PM
You mean to plug both of them in the same input? It would probably work, but not very good. I'm guessing that part of the iPod output signal would prefer to travel through the lower impedance that your guitar pickups provide, which might cause problems. You could build a buffer for each of them and mix them after it. That would provide some isolation.
Still, don't expect the results to be very good, guitar and line audio have quite different characteristics in terms of the signal processing needs.
#7

Slew rate is how fast can the op amp change from low to high, so 4 V/us means it can get from 0 to 4 V in one us. It is important in high speed switching, but not so much in audio. If you have rail to rail signal swing, say 30V (not in real life), it would take 7.5uS to swing it (7.5us of rise time). That is far beyond audio range, since frequency = 1/Tr.
You don't need that speed in audio, much less in guitar audio. For the sallen-key filter , you can just throw in any op amp you have, it won't make much of a difference.

EDIT: Terribly sorry for spreading misinformation, after a thorough reading I realized I was wrong. Apparently for the sallen-key filter, the gain bandwith product should be greater than 100*fc. Did not know that. So uA741 is out, but the others are good replacements.
#8

January 31, 2018, 11:23:15 AM
It is just a plastic jack, no need for a name. You get these mostly everywhere they sell components, from Ali to Farnell and everything in between. 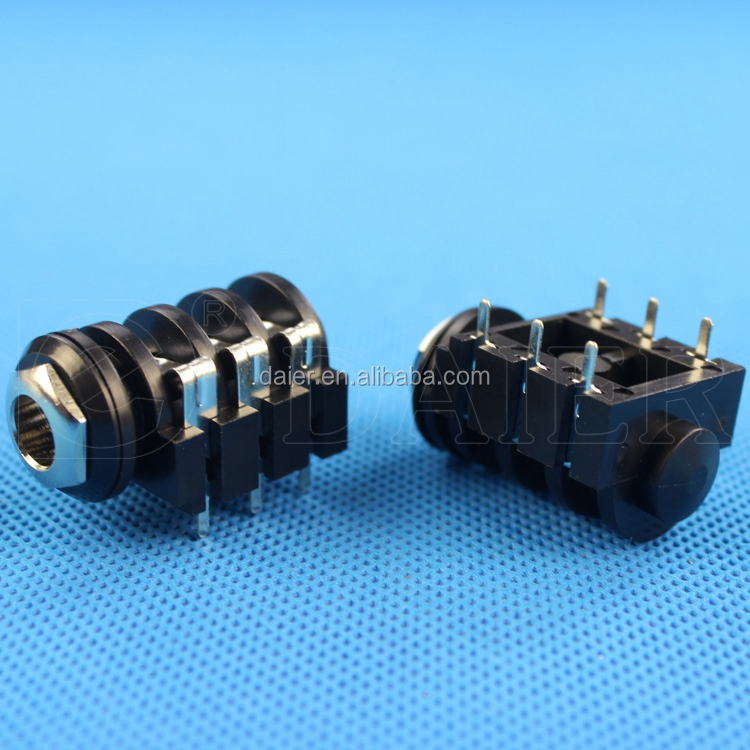 Yes, that's where the preamp will go. I'll move the input jack farther away from the PSU and the PCB input will sit right underneath it, so the wire will be a few millimeter long, like 12 mm or so. Hope that works just fine. I guess I should have mounted the PSU with the mains facing the opposite side. Will fix that. Man, I appreciate your input, really do, Thank you!

No problem at all. Good luck with your build then  :dbtu:
#11

January 30, 2018, 11:33:57 AM
Cheap practice amps are just that - cheap practice amps. The design goal is the same in all of them - lowest cost possible. That's why there are op amps with clipping diodes, fets are more expensive.
At least that's what I think...
#13

January 30, 2018, 10:55:15 AM
Crap, i was hoping there would be a cable... I wouldn't recommend mounting it inside the chassis, the coils would probably radiate too much for such a small enclosure. If the smps circuit has a transformer (as in - not just an inductor), you could fit in in another enclosure, one that would provide a connection to earth, but that's quite an advanced challenge, because you're dealing with potentially lethal voltages there.
If it's just a buck converter, there's nothing you can do but to buy another PSU. No mains isolation is a no-no.

Yes, the earth should be connected to the negative terminal, the ground.
#14

January 30, 2018, 09:37:59 AM
Awesome, now that you know the source of the hum, you can take measures to eliminate it. It might be as simple as opening the hard drive PSU and connecting the chassis to the output ground, or as annoying as having to buy/build another PSU, if the current doesn't even have a 3-pronged mains cable.

If you are feeling adventurous, you could open the hard drive PSU, desolder the current 2-prong cable and replace it with a 3-pronged one, connecting the mains earth to the output ground (be careful if you do that, small mistake could mean a large fire and/or electrocution!!!)
#15

If the hum is mainly 100Hz-ish, the smps switching noise might not be the problem after all, since they operate at higher frequencies. If you get the power from a switcher, the ground is probably not connected to the "earth" connector of the mains. That would mean that you could be picking up mains noise from everywhere around you. Does the amount of noise reduce if you touch the ground with your finger? If it does, there's your problem. If not, the input might still be picking something from the mains, if it is not completely encased in grounded metal.
Pages1 2 3