So they multi-plexed the three functions onto a two wire footswitch. All the extra circuitry is supporting the switching functions. And the reason the LED never goes off is that I don't have absolute switching on the control panel. I can set levels to 0 effect, but I can't actually "shut it off" - which can be done with the foot switch.
#2

I am partial to Jensen C12R and C12K (I had them in my old Peavey Classic 30 and they were both delicious compared to the original mounted, with a preference for the C12K) but I don't know how they sound compared to the one installed in the Eighty Five, which I suppose it could be an Eminence, rebranded.

Hemp cone speakers tend to be much less bright.

I put in an Eminence hemp into a Frontman amp and it killed the excess treble. Didn't fix the tone stack but it did tame the treble.  For your 12" application, the Cannabis Rex is the hemp option.

It appears to be controlled by IC 103 1/4 and/or a feed labelled "P" from TR109's emitter, above, in the Parametric EQ section.

In practice, it doesn't ever seem to be off, in any user control setting. Would that be a surprise? Does the circuit suggest it would be off in some particular state? Seems like a lot of circuitry to use if they only wanted to send it a "light me" voltage full time.
#4

It senses DC at the output and kicks out the relay to protect the speaker.  It's also supposed to be able to prevent over-current but I'm not sure if that function is being used.  (see datasheet attached)

I see, thanks. Makes sense to keep it in place then. I could obviously still have an issue even with the speakers disconnected. Better to have it .

--
Taking my own thread off topic for a moment.. Just for curiosity to expand my electrical/electronic knowledge while we're here: what sort of current are we looking at for this speaker that's getting 50 watts at 8 ohms?

If I use this formula, is it correct or am I missing other factors of audio and A/C signals?:

Quote from: g1 on May 04, 2022, 12:55:00 PMEnzo's approach would be the simplest.
But if you really want to automate it, there is already a relay engaging the speakers, you could just toggle that.
The type of switching jack you mean is probably with 'isolated' switch.
The switch could replace the connection between D112/C183 junction and R1998/R198 junction.
I believe that would leave the protection function via pin2 of IC111 enabled.
Full service manual attached.

I see that relay... so I guess my only question would be the same one as above: is it safe to run with the speakers disconnected from the output transistors in the power amp? I'm guessing so since you both suggested it, but make me feel good about the lack of danger. :-)

What's the function of IC111 i.e. what fault is it protecting against?

May I suggest, just unplug the speakers?  The schematic and parts layout shows the speakers plugging into the rear panel jack.

That's relatively easy. Is is safe to run without speakers connected? I thought that was a no-no.
#9

BUT, it turns out the headphone jack doesn't cut off the speaker output. Odd, and useless for late night practice while the household sleeps.

Circuit diagram, click on it to zoom once you're there: https://i.imgur.com/E30dpvS.png

HOWEVER, I'm a newb. I don't know if it's safe to just cut that feed of the power amp signal, so I could use confirmation on that plan. Also, do I need to have a pulldown resistor and/or something else to prevent a serious "pop" on insertion?

Lastly, do they commonly sell 1/4" jacks that also have an independent switching function built in in addition to the more common the signal switching? I know I've seen that feature in some pulled Fender board mount jacks, but I haven't see other generic jacks for sale that have the feature. What's the industry name for that sort of jack?  Also, looking at the chassis, the jacks are definitely the isolated type with plastic housings. So it needs to meet that bar too.
#10

Amplifier Discussion / Re: Fender 112 Deluxe Plus

By "oscillate", you mean feedback? Or just an uncontrollable oscillation while operating?
#12

Couple more questions: To shift that mid dip... to 400hz as you suggest... is that a one or two component swap, or a rearrangement of the whole tone stack? I've played with stacks a bit in Duncan's Tone Simulator, but this thing doesn't really fit in there.

Back on the capacitor C6, which is effectively filtering out treble: I've installed a switch and a pot for the diodes and played with that in conjunction with the overdrive (IC1-B) switching. It really is cutting a lot of treble. I think they were going for that dark boost tone. Misses the mark.

I know I can change the value of C6 to get more treble. Is it reasonable to just life C6 and see what it's like? Just "eliminate" the bypass? I can also try some lighter values but I'm wondering if it's safe to go to infinity.

EDIT: Took the better diagram you referenced and spent some time in the graphics program to clean it up further. I haven't edited any component value references... that will be phase 2. But this should be easier to read:

April 15, 2022, 12:34:26 AM
Dis-qualifier: I'm a newb....  but I spent a lot of time playing with a similar Fender tonestack in a Frontman Amp. In these analog SS amps, Fender tried hard to make them mid-scooped like their tube amps. Unfortunately, it comes off horribly. That sounds like what you are running into. Way too bright... like treble-beam on steroids. And I had three to test... all were the same. It's by design.

Also, I hunted for Studio 85 schematics but I too could only find the Deluxe and the Studio versions. But, they have the same tone stack. My WAG is that the standard 85 is the same.

So I put the tone stack for the Deluxe/Studio into Duncan's Tone Stack calculator. Here's what it looks like with bass/mid/treb all at "5": 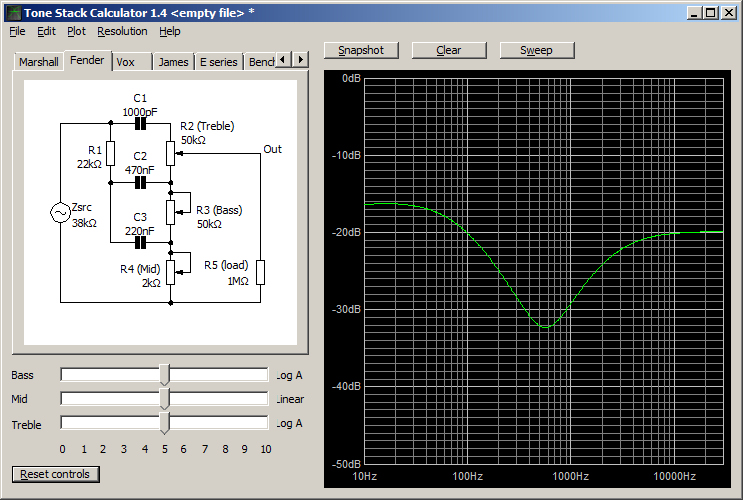 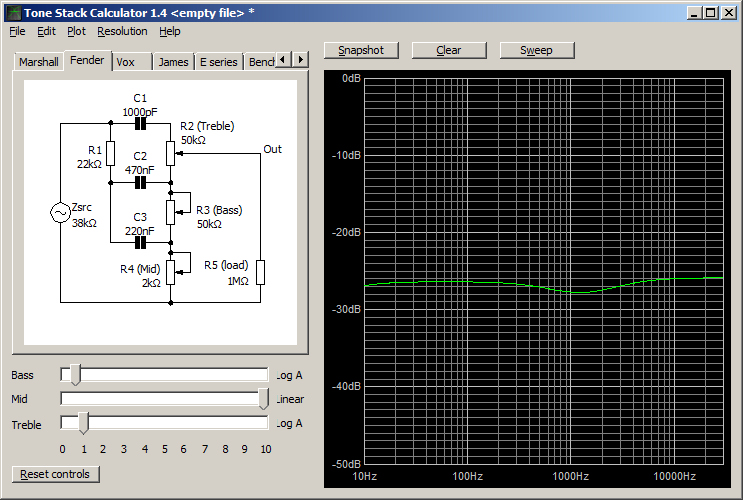 With the Frontman, I was able to get a good sound by allowing a slight mid scoop with B/M/T at 3, 8, 2. Not quite flat. But it left me with nowhere to go in terms of tone on the amps. EQ'ing for different guitars wasn't really possible.

As an experiment, try the settings I suggested for "flat"... and also the ones that worked for me. See how it sounds. If it's better, then you have the answer. You can either EQ that way, or spend time modding the tone-stack, or sell it and buy something that sounds better.

April 14, 2022, 11:55:47 PM
Ah, light bulb moment... so instead of bleeding the high frequencies to ground (like a tone control would), C6 lets them bypass amplification, thereby having the same rough effect... they don't get amplified and the tone is darker (but preserving at least some of the highs in the output).

So, if I were to change C6 to a smaller value, EX. 250pf, there would be less treble loss when IC1-B is turned on.

I'll head in there in the next couple days and try to get values on the tone stack and as many other components as I can read. If you don't mind mapping it out, that would be great. I usually try to fit tone-stacks into Duncan's Tone Calculator, but this thing doesn't look anything like the half dozen models they have.

Thanks for the pointers. I'll start looking for books as well as the sim programs.
Pages1 2