Suppose a pickup loaded by a 1M potentiometer.

We use a true 1M Log pot and a 1M Lin one with 100k strapped from wiper to ground.
We calculate 3 positions to make it easy and in any case are more than enough to show the heavy loading effect and wildly varying load impedance shown by the fake/simulated one.
A terrible idea I might add, sadly wildly popular because it looks "easy" .
I´ll simplify some values to closest round number, the idea here is not to get numbers accurate to 6 decimal places but to understand the concept of what´s happening.

Ok, let´s start with wiper on 0

Repeat with wiper on 5

Mmmmhhhh, load has varied significantly,  maybe it won´t hurt pickup sound that much, now if pot were after a small coupling cap (as in VOX and Marshall) I would be losing almost the full lowest octave.

And Log simulation is not that good either, we are almost 6dB above what a true Log would offer.

Repeat with wiper on 10

If it were a volume control after a small coupling cap, a common trick in respected Guitar amps, equalization would be a mess.

If following a triode stage, you would lose at least 6dB gain, because plate load resistor (typically 100k to 220k) would now be in parallel with 90k.

If following a pentode stage, which has high internal impedance and typically drives a high value load (220k and 470k are common values) effect will be a mess, easily losing 15dB signal.

Not enough time now to show the effect of a fake Log Pot used as variable NFB gain control in an Op Amp circuit, but believe me it´s even worse than this.

But is it absolutely useless then?
No, there is *one*  very limited case where it works, sort of, at least as a Saturday afternoon stopgap until shops open on Monday and you can buy a proper Log one: IF you use it as a passive Volume control after a low impedance driving stage, say an Op Amp, which can easily drive the much reduced impedance shown on 10 , then it´s acceptable.
Not accurate but human ear is so imprecise that it won´t complain. 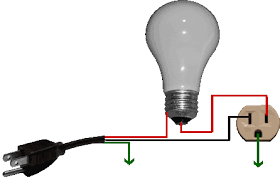 I don't like the switch bypassing the bulb shown in the lower image, simply because it's too easy to switch it on by mistake.
Suggested bulb: 25W for small SS amps (10/30W) ; 100W for high power ones (60/200W); a tube amp might require a 150W to 200W bulb, simply because it eats too much on idle, because of all those filaments.
Most sites state that the bulb burns if a short is present; it does not; worst case it shines brightly, with full power.
If the amp is fine, the bulb usually lights barely visible red.
It allows to measure many things (do I have power rails? do I have DC on the speaker out?) which a fuse would not let you to, because it burns in a millisecond.
Remember all voltages will be low, the bulb is eating part of the wall voltage, do not aim for "schematic perfect" voltages but a reasonable proportion.
Example: power amp /main PSU states +/-40V DC
If I have a dark red or weak orange bulb, measure +/-25V, have no DC on output jack, amp is probably fine.
If I measure +/- 1 or 2V rails or +/-25V but have 24V on speaker out: bad sign.
In this last case, if I have 49V across the lower output transistor and 0.12V across the upper one, I can be pretty certain that the upper one is shorted, which will be confirmed later with an ohmmeter test with the amp off .
That's the general idea.
Much faster and better than:
replace one transistor -> power on -> blown fuse ... replace another -> power on -> blown fuse ... (repeat 25 times) power on -> nothing burns ... so THIS was the bad transistor !!!!  :grr :grr :grr
#3

Hi joecool, thanks.
That's not surprising.
For long times I had a small factory running, with 3 to 6 guys working for me, with Christmas and New Year peaks of up to 8.
Now I'm working with just one guy who does the carpentry, transformers, mounts speakers, etc.
I make boards, panels, speakers, plus actual wiring.
My amps are very simple, I can wire 4 100W heads a day.
In Argentina it was *impossible* to buy US made and British amps, so people were happy to buy whatever I could provide, as long as I had the same quality sound.
When economy "opened" we were flooded with cheap imports and a big part of Argentine economy died, specially the Industry.
I survived because I strayed away from "expensive/boutique" amps (nice but I might sell 8 a year) and got into good sounding but very competitively priced "battle proven workhorses".
I do not make "student" amps, I can't compete with chinese cheapies, 95% are 100W "stage/live" amps.
As an example: my 100W head (Guitar or Bass) costs U$140 ; my 2x12" cabinet the same

New, with 1 year guarantee, parts and service assured for the next 10 or 20 years (that's a big selling point).
That's why I sell around 20 a month, with lows of  8 and highs of 36.
I've had many 6 amp Saturdays , with clients arriving with 1 to 2 hour intervals so they can test freely.
There have been bands born, with musicians meeting here, jamming together and liking what came out.
Just for some old photos and scans: http://www.flickr.com/photos/jmfahey/
It's in Portuguese, this was hastily thrown together for some Brazilian customers.
The magazines are the local equivalent of Guitar Player.